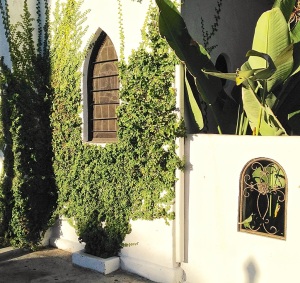 We are always up for a foodie adventure. Over the years, we’ve managed to find the top restaurants Roanoke, visited Michelin star restaurants, and tried nearly every type of cuisine! We especially love going on foodie adventures on hot and humid evenings like last night. I think eating out is the best way to socialize and get the feel of a location. It can cost a pretty penny but luckily we have a AMEX Gold Card to get us by! We thought last night would be the perfect time to look for a new place to eat. We had spent the day at the park, relaxing under the shade of twisty tree branches while the kids ran around the playground. Doing nothing for a change was such a treat, but the heat was exhausting. By dinner time, no one was in the mood to cook and eating out sounded like the perfect escape.

Luckily, Mom found a new restaurant called Cascabel featured in an issue of AAA’s Westways Magazine. An old ivy-covered Spanish house with little niches here and there, the restaurant is a hidden gem tucked behind storefronts off a busy street. Cozy spaces with arched windows, creamy plaster walls, exposed beams and old hardwood floors set the stage for a relaxing meal. It felt like an airy seaside cottage. The only thing missing was the sound of waves crashing on white sand.

I was a bit disappointed the hostess led us to a table in one of the smaller rooms, but, now that I think about it, I don’t think I could focus on my food with that stunning rattlesnake staring at me. The menu features coastal Mexican fare in mostly appetizer portions intended to be shared family-style. This makes for a relaxed atmosphere and guarantees everyone gets a taste of everything.

A full bar is at your service, but don’t expect anything blended. Margaritas are authentic, served on the rocks. I tried watermelon margarita first, then the house special which is a proper classic. The rim of the glass came laced with spicy-sweet guajillo chile salt which I shamelessly licked, then giggled like a little girl. I was in good company, after all. 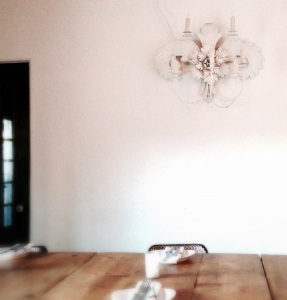 There is something for everyone, starting with guacamole in cool flavours, like charred pineapple or the popular smoky bacon. We ordered a hell of a lot of food: The famous bacon guacamole, of course, followed by black beans, Spanish rice, duck confit tacos, shrimp tostada, crispy chicken tacos, yellowtail ceviche, sirloin tacos with fresh chimichurri. Because this just did not seem like enough food, we also ordered a couple of side dishes: Asparagus with what appeared to be a chili-garlic harissa type of sauce and roasted cauliflower dusted with cinnamon. It was all so delicious that I was too busy stuffing my face to be bothered with taking photos. At least I managed one of the crispy chicken tacos (after I’d already gobbled up the first one). 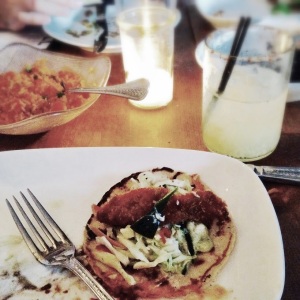 There was nothing reptilian on the menu, nor anything that a rattlesnake itself would eat, except for the duck and rabbit both of which are off-limits for me.

Dad offered me a bit of his duck and, while I usually don’t eat that either, I can’t refuse my sweet father and this was well worth the sacrifice. It tasted like Mom’s roast.

Everything out of that bustling little kitchen was so fresh and bold, but I could have easily been very happy with just a plate of those little fluffy tortillas, some butter and honey. God, they were good. That’s my plan for next time. Maybe I’ll see you there. 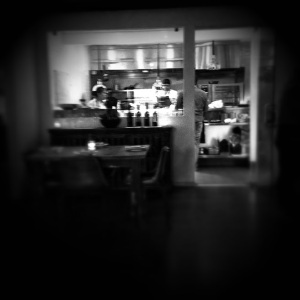 *Please note that this is not a sponsored post. I went to a restaurant I enjoyed and wanted to share my experience with you.

Basque/Burnt Cheesecake fresh out of the oven. I

Basque/Burnt Cheesecake in the works for tonight!

Time for afternoon tea and taste-testing these Car