So much is packed into one li’l word. It always reminds me of New Orleans.
It was 1989, the summer before I started college. My parents took us there for a week-long vacation
and we had a blast.
The locals were charming & hospitable.
The food? Phenomenal.
After all these years, certain visions still bounce around in my head and make me smile…
Eating at The Commander’s Palace before Emeril became a household name.
Watching street artistes performing live jazz.
The cute Sicilian deli where I had my first muffuletta,
that safari shoppe on the corner, and of course beignets every day at Cafe du Monde.
Who can forget the sugar-powdered floors?
When I saw a recent blog post by my foodie-buddy David from Cocoa & Lavender,
I just had to bring N’Awlins home for dinner. 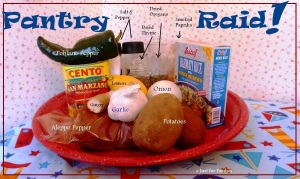 I like to make my own spice mixes, especially since ground spices have a tendency to lose flavour after some time.  Get yourself a li’l coffee grinder and make your own. Keep it clean by whirling a few chunks of
day-old bread after each use.

Put all the herbs and spices into a grinder and give them a whirl.
Store this seasoning in a recycled jam jar or a plastic sandwhich bag
up to 6 months.

If you have a gas stove or grill, roast the poblano pepper over one of the burners. Let the peel crack and pop until most of the skin burns off.

If you have an electric range, sear the poblano on all sides in a nonstick pan. Then put the pepper into a bowl, cover with plastic wrap or top with a plate. After about 5 minutes, the steam from the hot pepper will help the skin separate from the flesh, making it easier to peel.

Wash the charred bits off under cold running water at the sink and remove the stem and seeds.
Chop the poblano and set aside.

Make the rice according to box instructions. Empty box contents into a small pot with a lid. Add 1 Tb olive oil and 1 1/2 cups water. Stir and cover with the lid. Allow the rice to cook on medium-low heat for about 15 minutes.

While the rice is cooking, wash and chop a medium potato into li’l 1/2-inch cubes.
Empty the par-cooked rice into a clean bowl and drizzle a bit of olive oil into the pot.
Toss the potato cubes and arrange into one layer at the bottom of the pot. Season well with
salt & pepper. Use a fork to gently return the rice over the potatoes.
Cover with the lid and let the potatoes on the bottom cook on low heat.

Melt the butter and as it begins to bubble, stir the flour in until a fragrant toasty paste forms.
This is what the French call roux.
Remove from pan into a small bowl and set aside.

Return the roux to the pan and add the juice & zest of one lemon.
Sprinkle a couple of teaspoons of the cajun seasoning you made and stir everything together gently.
Taste the sauce and adjust the seasoning (more salt, pepper and/or cajun seasoning).

Open the can of the San Marzano tomatoes and use a clean pair of kitchen scissors to cut the tomatoes into big chunks right in the can.
Add them to the pan, taking care not to splatter any hot oil. Give it a stir,
then cover the pan and allow the tomato sauce to simmer for about 10 minutes on really low heat.

About 15 minutes before serving, add the frozen shrimp & scallops, cover the pan with the lid and give them time to cook. Check every few minutes to be sure you don’t overcook the seafood. Once the shrimp turn pink and the scallops become more firm in texture, they’re ready to go.

Finish with frozen peas, give the lot a good stir or two and cover again.
Another 5 minutes for the peas to cook.
Chop the coriander.

Take the rice off the stove and remove the lid from the pot. Cover with a sturdy dinner plate and with one hand over the plate, flip the rice onto the plate, then remove the pan.

Serve the étouffée over the herbed rice, topped with a sprinkling of fresh coriander.

New Orleans is such a special city.
The local saying “Laissez Les Bons Temps Rouler!” is a nod to its French heritage
and a carefree approach to life.
Weeknights are usually a bit frantic for all of us. Rushing out of the office to the grocery store, then home to whip up dinner, bathe the kids, read bedtime stories, look for monsters under the bed, then finally chill in front of the TV with your honey.
That’s everyone’s routine these days, no?
With this dish, it seemed like the clock was more forgiving than usual.
I got to enjoy cooking on a weeknight, for a change.
The rice is more Middle Eastern than Southern, but goes
oh
so
well
with seafood.
Étouffée bursting with flavour atop li’l browned cubes of potatoes and fragrant emerald rice.
The first bite will flood your head with the sound of jazz in old N’Awlins.
Let the good times roll … 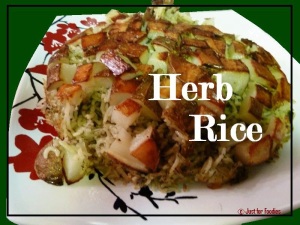 « Lucky Girl: My Breast Cancer Story
Thanks for the Liebster Award Award! »